When others rush out, they rush in. First responders are among the first professionals to arrive and provide assistance at the scene of an emergency, such as an accident, shooting, natural disaster, or terrorist attack. They are our police officers, firefighters, and emergency medical technicians (EMTs). According to the Department of Homeland Security (DHS), there are over 1 million firefighters in the United States (of whom approximately 750,000 are volunteers), approximately 556,000 full-time local police officers, and over 155,000 nationally registered emergency medical technicians (EMT). One aspect of all of their jobs is treatment of injured people and administering wound care.

According to the Center for Disease Control (CDC), injuries—including every cause of unintentional and violence-related injuries—account for nearly 60% of all deaths among those aged 1-44. In this first half of life, motor vehicle crashes, drug overdoses, falls, homicides, and other incidents claim more lives than infectious and non-communicable diseases combined. The CDC also reports that prompt first aid can help heal these wounds and prevent infection. In the event of injury, the center states that first responders should take the following steps:

Each year, about 60,000 Americans die from hemorrhaging, or blood loss. This figure jumps to almost 2 million when factoring in hemorrhaging cases globally. In addition, it’s estimated that as many as 1.5 million of these hemorrhaging deaths are caused by physical trauma. Studies also show that more than 50% of people with traumatic injuries involving hemorrhaging die within minutes of the accident or injury.

“A person could bleed out and die from an injury in as little as five minutes,” says Erin Beck, RN, MS, CEN, CCRN, clinic nurse educator of Trauma Services at Avera McKennan Hospital & University Health Center. This makes stopping the bleeding with proper wound closure applications crucial. However, as noted previously, suturing on the scene can be risky and cause infection; needlestick injuries are more likely to happen when a first responder is under pressure, plus, it’s very time-consuming, especially in a situation involving mass injury. In addition, some bandages are not waterproof, which can pose problems in certain weather conditions or in hurricane and flooding scenarios.

BandGrip can do its part to save lives by saving time during emergencies. BandGrip is a non-invasive, waterproof 3.5”x1.5” Micro-Anchor Skin Closure bandage that is designed for speed and ease of use (it can also be tiled for large incisions or lacerations). In emergency situations, it can be applied quickly by first responders to stop blood loss to help ensure patients are stabilized during the all-important golden hour. It’s also ideal for situations involving high-volumes of traumatic injuries, such as a natural disaster, terrorist attack, military combat zones, or a multi-car accident scene.

Turning Everyone Into a First Responder

BandGrip also has the ability to turn anyone into a first responder. “Emergency services aren’t usually on scene and may take longer than that to arrive,” says Back. “The first responder could be you.” Beck says that everyday individuals on the scene can act as first responders, after ensuring their own safety, by following the ABCs of bleeding:

BandGrip’s ease of use means that it can be applied by anybody on the scene of accident or injury. BandGrip’s vision is that every household, workplace, and car will be equipped with BandGrip on hand, turning everyone into a first responder.

You can see BandGrip in action here, and be sure to download the ebook below to learn more about BandGrip for traumatic injury. 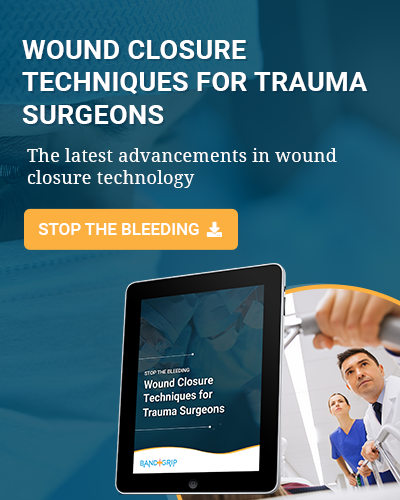